In 1869 Winnipeg was a straggling frontier village in the Red River Settlement. It was located in the immense Diocese of Saint Boniface, led by Archbishop Alexandre Taché.

To provide an education for Catholic children west of the Red River, the Archbishop asked the SNJM for help. Still waiting for an answer and obliged to respond to urgent needs, the bishop of the Diocese of Saint Boniface entrusted the task to the Grey Nuns, who opened St. Mary’s Academy near the confluence of the Red and Assiniboine rivers (The Forks). The arrangement was supposed to be temporary.

Finally, in 1874, four women religious from the Congregation of the Sisters of the Holy Names of Jesus and Mary (SNJM) left the Hochelaga Mother House in Quebec to travel to the doors of Western Canada and assume responsibility for the institution, St. Mary’s Academy. 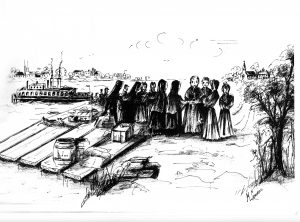 Sisters Jean-de-Dieu, Marie-Florentine, Electa-du-Sacré-Cœur and Marie-Élie travelled by train, steamboat and barge to finally arrive in Saint Boniface on August 22, 1874, after 12 days of long journeying. The newcomers were between 19 and 27 years old. They took charge of this English-language Catholic school and it has continued to flourish ever since.

Under the direction of the Sisters of the Holy Names of Jesus and Mary, the school increased its enrollments and made several expansions. 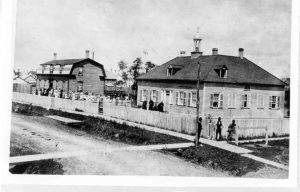 St. Mary’s Academy is currently located at 550 Wellington Crescent. It is celebrating its 150th birthday in 2019. For more information on the school and its programs, visit.