The Congregation of the Sisters of the Holy Names of Jesus and Mary owes its existence to a daring and determined woman: Eulalie-Mélanie Durocher, who became Mother Marie-Rose. Her story is brief and simple.

Born on October 6, 1811, in St-Antoine-sur-Richelieu, Quebec, she was the tenth and last child of the Durocher family. When her mother died, Eulalie, then aged 18, was invited by her brother, a parish priest in Beloeil, to serve as governess of the presbytery. She worked there for 13 years, actively participating in parish activities. While working there, she recognized the spiritual and social needs of her region. The influence she had on people and her commitment aroused the interest of Bishop Ignace Bourget, who invited her to found a new religious congregation devoted to education.

In October 1843, Eulalie — accompanied by Mélodie Dufresne (Mother Marie-Agnès) and Henriette Céré (Mother Marie-Madeleine) — founded the Congregation of the Sisters of the Holy Names of Jesus and Mary (SNJM) in Longueuil. 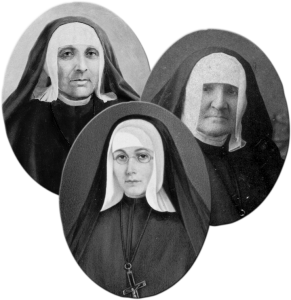 On October 6, 1849, six years after the founding of the Congregation, Mother Marie-Rose died at the age of 38. Her hard work, determination and collaborative approach with local people had enabled the Congregation’s foundations to be consolidated and it rapidly expanded, with schools established in various Quebec villages and then across Canadian and USA borders.

Find out more about the history of the foundation in Manitoba.