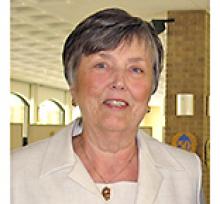 God came for Sister Margaret Dick (Sr. Robert James) like “a thief in the night” on April 24, 2019, which is exactly the way she would have wanted it. Margaret leaves, to mourn her loss, two sisters, Louise (Thibeault) and Suzanne (Shott); two brothers, Robert and Brian, her nieces and nephews, the Fort Qu’Appelle community, Father Glenn Zimmer, and his Oblate community, and her own Holy Names sisters.

During her early years as a vowed Sister, Margaret served as a teacher, and sometimes a principal, at numerous schools run by her religious community: Immaculate Conception, St. Ignatius, St. Gerard’s, St. John Brebeuf, and St. Maurice Roche in Flin Flon. She enjoyed her years in the classroom, whether teaching in the primary grades or Junior High. As time passed, however, Sr. Margaret was increasingly drawn to ministry outside the classroom. In 1975, after completing her B.A., she enrolled at the Institute for Spiritual Studies at Berkeley College in California. Upon her return to Manitoba, she ministered at Notre Dame Parish in Kenora.

Sr. Margaret resumed her studies in spirituality in Chicago and completed her Masters in 1983. Her desire to become a spiritual director was realized in 1987, when Fr. Glenn Zimmer, O.M.I. invited her to join his retreat staff at Queen’s House in Saskatoon. Eight years later, when Fr. Glenn accepted a challenge to turn a country estate into a House of Prayer at Fort Qu’Appelle, and invited Margaret to join him in this pioneering effort, she said “yes”.

Life at Qu’Appelle House of Prayer came with new delights and new challenges: a beautiful chapel forged in the wilderness; a garden to tend and canning to be done; daily supper to be prepared for guests. Margaret, a city girl, came to love the rural setting and solitude. During her years at the House of Prayer, Margaret lived a distance from her religious community, so she happily accepted the Oblates’ invitation to become an associate member and, as such, she participated in their meetings, social events and retreats. The Oblates so appreciated Margaret’s presence in their midst, that they recently asked permission from their General Leadership to make her an “honorary Oblate” this June.
Sr. Margaret always found creative new ways to reach those she directed at a deep level. She had a special gift for listening. Fr. Glenn, ever touched by Margaret’s childlike inner self, said, “It seemed the child in her was deeply attracted to any small child she encountered, and the child always seemed drawn to Margaret.” Sr. Margaret, you will be missed.