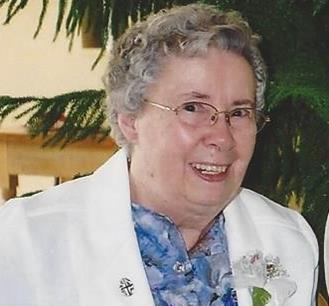 Sister Maria Carignan (Sr. Françoise-de-Marie) was called to her God on Saturday, November 19, 2016 at Actionmarguerite, St. Boniface, Manitoba. She leaves in mourning her sister Gabrielle, her nephews and nieces, her friends and the sisters of her religious congregation. Maria was predeceased by her parents, her sisters Claire, Madeleine, Françoise, snjm, Alice and Thérèse, s.p. her brothers Gaston, Jean and Louis.

The eighth child of a family of 10 of Marie-Anne Lacourse and Joseph Carignan, Maria was born on August 13, 1923 at St. Claude, Manitoba. Her initial schooling was at Ecole Sacré-Coeur, then she pursued her studies at St. Joseph’s Academy and St. Joseph College. She graduated with a Bachelor of Arts from the University of Manitoba and a Masters in English Literature from the University of Ottawa. Maria entered the Novitiate of the Sisters of the Holy Names of Jesus and Mary in Outremont, Québec on July 24, 1942 and made her religious profession on August 24, 1944.

Between 1944 and 1981, her teaching experience was mostly at the High School level as a teacher of English, French and religion at St. Joseph’s Academy, Somerset, St-Jean-Baptiste, Sacré-Coeur, Holy Cross, St. Mary’s Academy, St. Boniface Diocesan High School and St. Boniface College. Sister Maria was not only appreciated for her knowledge but also for her generous apostolic spirit.

A woman of prayer, she drew from the Holy Word, the teachings of God which she then applied in her daily living. During the Renewal Program at St-Jean-Baptiste, Maria facilitated meetings for a group of parishioners and was greatly appreciated. She continued meeting with a group after the Renewal Program and that gave rise to prayer groups in the parish. For many years, Sister Maria was a member of the team responsible for the SNJM Associates. She has been a precious support to all those who have journeyed with her.