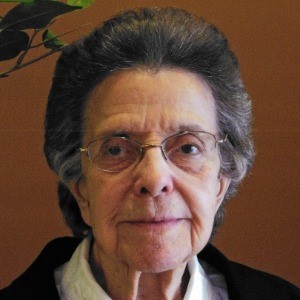 Peacefully, Sister Alma (Sister Yvonne-de-Marie) left her earthly dwelling to meet her God and Saviour at Actionmarguerite, St. Boniface, Manitoba on August 7, 2020. She leaves to mourn her passing, her sisters Thérèse, Aline, Jacqueline (Philéas), Simone, her brother Gilles, sisters-in-law Agathe and Marj., many nieces and nephews and her religious family.  She was preceded in death by her parents Yvonne Bouchard and Edmour, her sister Lucille and brothers Joseph, Henri, Yvon, Maurice, sisters-in-law and  brothers-in-law.

Alma was born in Sainte-Agathe on January 12, 1929 the 3rd child of Yvonne Bouchard and Edmour Fontaine.  She grew up in a large family on a farm and went to school at Sainte-Agathe convent. At a very early age, Alma learned the art of serving and collaborating easily on multiple tasks. Household tasks and work on the farm were done with great energy to help the family.  In later years, she was hired as an employee at Sainte-Agathe convent and then at St.Joseph’s Academy and Hospice Taché in Saint-Boniface. After a few years, she decided that time had come to put forth her aspiration to join the religious order of the Sisters of the Holy Names of Jesus and Mary. On January 24th, 1952, she entered the novitiate in Outremont, Quebec.  Sister Alma then made her first vows on February 5, 1954 and her perpetual vows on August 5, 1958.

Upon returning to Manitoba in 1954, Sister Alma took on the responsibilities of head cook in convents with large groups of sisters and boarders at Académie St-Joseph, St. Mary’s Academy and St-Jean-Baptiste Convent. In Duluth, St. Mary’s Convent and St-Pierre-Jolys, her cooking ability, her enthusiasm and her good humor were greatly appreciated.  Even though she was always ready to help, she also delighted to take time to have fun and talk with visitors.  Being a very sociable person, she appreciated family gatherings and cultural outings. Knitting, was a passion and an enjoyment for her. It also fulfilled a great need for children who had cancer and others in faraway missions. Nothing could make her happier than giving any of her creations to anyone who visited her.  Feeling that she helped people in need made her as happy as a lark.  Close to the end of her life, to show her appreciation, Sister Alma offered knitted gifts to the nursing staff at Résidence Despins and Actionmarguerite.

The Fontaine family and the Sisters of her religious congregation are very thankful to the staff at Residence Despins, the 3DE unit at Actionmarguerite, Diane Rioux and Josée Wiedmer for their compassion and care given to Sister Alma.