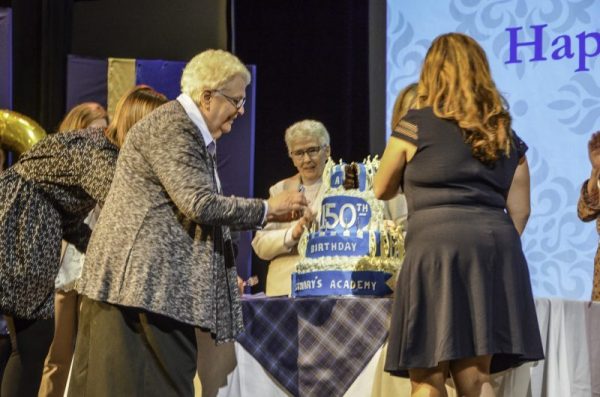 On May 1, 2019, St. Mary’s Academy birthday celebrations began with a day-long birthday party for students and staff. Honoured guests included Sisters of the Holy Names of Jesus and Mary, Grey Nuns, Board members and special friends of the Academy. The day started with Mass in Alumnae Hall presided over by Archbishop Albert LeGatt, current Archbishop of St. Boniface. It was fitting that he be invited to preside because when the school opened on May 1, 1869, the site was then within the boundary of the Archdiocese of St. Boniface. After Mass and a thrilling fly over by an armed forces Dash 8, a delicious community lunch with pizza, chips and birthday cake was shared by all in attendance followed by an afternoon of fun activities. 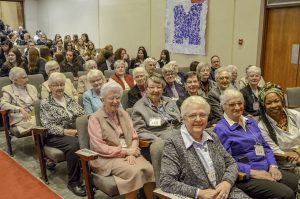 Sisters of the Holy Names and the Grey Nuns attend Mass.

At the Marian Awards on May 11, 2019 the school recognized its founders, The Sisters of Charity of Montreal, (known commonly as the ‘Grey Nuns’). On May 1, 1869, Sisters Ste Thérèse and Mary Jane McDougall, opened “Maison Ste Marie” (St. Mary’s Academy). This was the first Catholic school to serve the English-speaking Catholics on the west side of the Red River. The Grey Nuns operated Maison Ste Marie until 1874 when the Sisters of the Holy Names of Jesus and Mary assumed responsibility for the school. The Sisters of the Holy Names joined the Academy community in honouring the Grey Nuns for their faith, service and leadership in establishing St. Mary’s Academy.

On September 27, 2019, St. Mary’s Academy hosted a 150th Birthday Gala in honour of the Sisters of the Holy Names of Jesus and Mary. Twenty-five Manitoba Holy Names Sisters and four out-of- Province Sisters were in attendance. Over 700 guests from near and far were in attendance including parents, students, alumnae, current and former parents, staff and board members as well as many friends of SMA.

SMA President Connie Yunyk, an alumna herself and the mother of an alumna, as well as being an associate of the Holy Names, enthusiastically welcomed everyone. Sister Kathleen Ross brought greetings on behalf of the Congregational Leadership Team.

A special moment in the program was the presentation made to the Sisters of the Holy Names by the Parents’ Guild. Current President Ramona Thomson, and former President, Pattie Moore (Delabbio ’69) unveiled a picture of the stained-glass mosaic that was installed outside of SMA’s Alumnae Hall doors. The inscription beside the mosaic reads, in part, In gratitude to the Sisters of the Holy Names of Jesus and Mary and all SMA educators and staff for the 150 years dedicated to the education of our daughters in spirit, mind and body. Click here to read more…

Sisters of the Holy Names 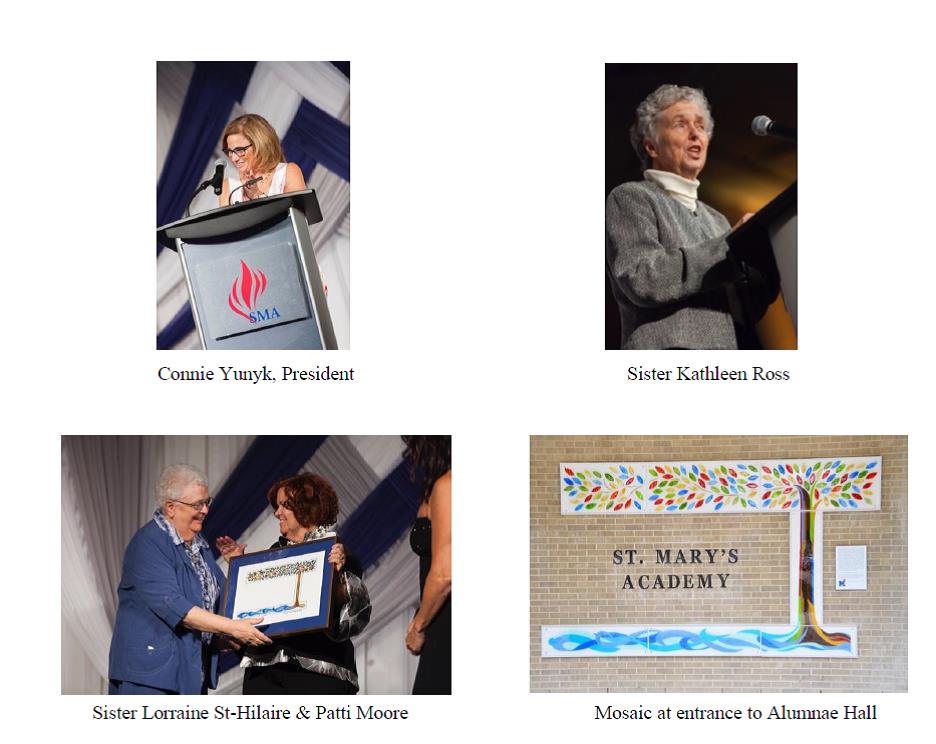 Homecoming Weekend continued on Saturday, September 28, 2019. Sisters who were former SMA students and teachers participated in the brunch for classes celebrating reunion years followed by an afternoon open house and tours for all alumnae.

The annual Mother Marie-Rose Week at St. Mary’s Academy incorporated a unique twist this year as part of its 150th birthday celebration. SMA hosted a Come and See for six SNJM Schools including Albany, NY, Alhambra, CA, Oakland, CA, Portland, OR, Seattle, WA, and Tampa, FL. The visitors arrived in time to join the Manitoba SNJM family on Sunday, October 6, 2019 for the annual celebration of the Feast of Blessed Marie Rose Durocher and renewal of Associate commitment. Sisters and Associates were delighted to meet the visitors.

St. Mary’s Academy closed its 150th anniversary year on December 8, 2019, the Feast of the Immaculate Conception with Mass and High Tea. Mass was celebrated in Alumnae Hall with Archbishop Albert LeGatt presiding. A special moment took place at the conclusion of Mass when Sr. Lorraine St-Hilaire, SNJM, and Sr. Susan Wikeem ’63, SNJM, presented to Connie Yunyk, SMA President and SNJM Associate, an Apostolic Blessing upon the Academy from the Holy Father Pope Francis. 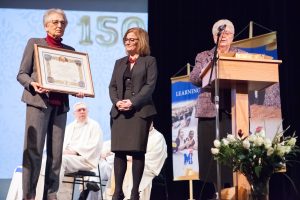 The Holy Father Pope Francis graciously bestows the Apostolic Blessing upon Teachers, Students and Staff of St. Mary’s Academy in Winnipeg, Manitoba, as they celebrate on May 1, 2019 their 150th Anniversary of founding.

The Holy Father prays that through the intercession of the Blessed Virgin Mary, the Academy may be a place of encounter with the person and message of Jesus Christ and thereby assist the young women who pass through its doors to go forward and make a most valuable contribution to the life of the Church and the wellbeing of society, especially the least.

Click here to view all pictures from the St. Mary’s Academy 150th Celebrations.