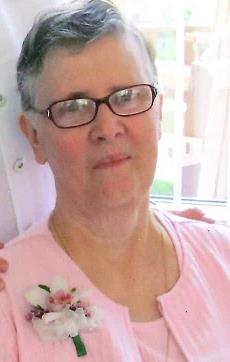 She surmounted many challenges in her life, not least of which was the suffering in the last months of her life. Imagine her singing and dancing as she was relieved of pain! Evelyn always had a twinkle in her eye. She was thrilled when she passed the exams qualifying her as an LPN.

She rejoiced in being a member of a medical family: Ann Palmer, nurse and oldest sister, Mary Denby LPN and Joseph, a medical doctor. Evelyn spent many years lovingly tending to the sisters at the Mother House in Montreal, some in Windsor, and Flin Flon General Hospital, St. Mary’s Academy and Résidence Jésus Marie.

Evelyn had a passion for life and was curious about everything. She gardened, rode her bike and cleaned. Her faith was profound. “I am blessed by Him, and I know it.” In her autobiography she writes “When I discovered the Lord I had been searching for since my early youth, I was overjoyed. I could not stand still, I was rejoicing so much.” Her family and community wishes to thank the entire staff on 5C at Actionmarguerite (Taché Centre) for the wonderful care and compassion showed to Sr. Evelyn.