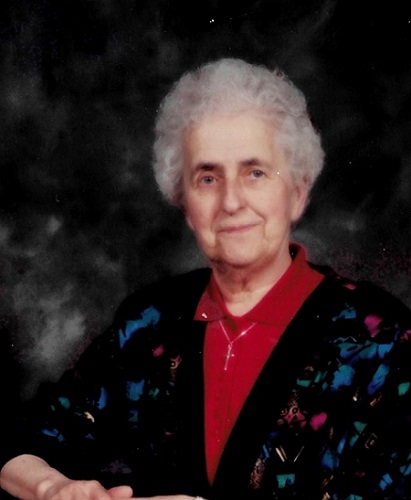 Sister Irène leaves to mourn, her sisters Clara (L. Carrière), Lucienne, Lorraine, her nieces, nephews and the members of her religious family. She was predeceased by her parents, her brothers Emile, René, Roger, Marcel, Georges, Ovide, her sisters Jeanne, Thérèse, Eva, Alma, Sister Agnès, SNJM, Lucille as well as sisters-in law and brothers-in-law.

Irène was born in Transcona on May 4, 1925, the seventh child of Alice Martin and Raoul Lambert. She studied at the Convent in St. Pierre Jolys and entered the novitiate of the Sisters of the Holy Names of Jesus and Mary in Outremont, Québec on July 24, 1944. Two years later, on August 22, Sister made her religious profession and returned to Manitoba.

During thirty years, Sister Irène shared her special gifts with students in Grade one at École Sacré-Coeur and Somerset. With great patience, she gave them a solid formation for later years. As a pedagogical counsellor au Bureau de l’Éducation française, she worked with primary teachers in French Schools. Subsequently, her field of service became one of pastoral ministry to the elderly in St. Malo, Somerset and St. Jean-Baptiste. Her special listening ability was a great asset as she visited the elderly, the sick and the grieving people. As she had always been very generous Sister Irène never hesitated to accommodate anyone who needed to be driven for shopping or for a doctor’s appointment.

The Sisters of the Holy Names and the family would like to express their gratitude to the staff at Résidence Despins and the 3DE unit at Actionmarguerite St. Boniface for their compassion and care given to Sister Irène.